A plethora of public house-themed metaphors and general Wetherspoon memes have spun up in the wake of Tim Martin announcing the dissolution and shuttering of all JD Wetherspoon’s social media accounts. Somewhat ironically, the lion-share of this fallout has happened on the very channels that the chain is vacating.

Some are hailing this as part of an ongoing backlash against social media – whether that is true or not remains to be seen, although empirical evidence for a collective shift in corporate consciousness would be hard to collect. Nonetheless, it’s a bold move by a chairman who is renowned for throwing caution to the wind on certain issues. Ostensibly this move is to cut out a process that doesn’t generate a noticeable return on investment, although with some of the online reviews that were being left, it could be as much about protecting their brand image from poor consumer feedback.

Only time will tell whether this was the right call for Wetherspoon but in the meantime, we wanted to look at what this means for everyone else still plugged in, and why it’s much less of a big deal than at first it seems.

The ‘reason to exist’ or leverage social media channels should sit at the core of everything a brand does on social. Whether that’s selling products, building brand awareness, protecting brand equity or distributing information/support to customers – by no means an exhaustive list, but an indicator that fundamentally, it should be easy for a brand to answer the question of ‘why’ if asked their rationale for using social media as a marketing channel.

Wetherspoon has become a victim of its ubiquity and size – everyone knows where their nearest ‘Spoons is, and if you’re a Wetherspoon regular, you’re not going to be more or less likely to head in for a pint if you see a tweet wishing you a happy Fri-yay, Thirsty Thursday or Wine Wednesday. Most Wetherspoons are open when other pubs are not, so there is no need to check for opening times on Facebook, and when it comes to customer support, they’ve had issues in the past: 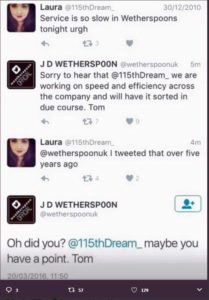 Executing successful and productive social media plans is an undeniably intensive exercise – especially when there is any degree of complexity involved, including looking after a large number of presences, centrally or otherwise. Tim Martin expects that Wetherspoon will uncover a commercial advantage repurposing this time for other areas of the business. This may well be true, but I think the argument that this is because other pubs and bars will be wasting their time with social media is disingenuous. Certainly, for local pubs who run different events and engage with their local community it’s a relatively quick and painless exercise to put a blast out and get in touch with their customers – one that it could be argued has a far greater opportunity at being effective. Other chains further up the value scale would also have myriad opportunities to talk about different promotions or offers. For a brand like Wetherspoon who were managing central profiles, as well as corralling branch profiles to adhere to brand guidelines etc. you can see why it could be an unproductive time sink.

It has been alluded that there was a certain amount of negativity on social around Wetherspoon, and as such removing the brand from the picture will help address this to some extent. While this may be one of the motivations behind the move, the intended result may not be as simply achieved. People will still use social to connect and have discussions around the brand and places they go to – if Wetherspoon has a customer service or image issue, simply closing off their ability to respond to those things is not a robust tactic for addressing the root of the problem.

What we use social media for

Social media marketing (in its many guises) is but one channel, with PR, PPC, search, programmatic, experiential and many others being as important depending on what the brand is trying to achieve. While it could well be argued that Wetherspoon will be better placed putting those hours spent on social into other guest services, the idea that any brand activity on social media is a pointless exercise is very misguided and absolutely the wrong message to take away from the actions of the Wetherspoon brand.

Reading through the lines this is a resourcing and efficiency play rather than an explicit rejection of social as a channel. Wetherspoon is a behemoth of the UK eating and drinking culture – some would say it’s part of the DNA of the country. A roaring success story of British entrepreneurism, but whereas a standalone brand might be able to achieve this and still use social media effectively, the very fragmented nature of planning and running an effective social media programme for over 900 pubs in the UK under one brand is understandably an extremely technical and involved task, so for Wetherspoon this gamble could well end up paying dividends.

For other brands there is still a lot of opportunity and value to be unlocked by running social well alongside other channels.

Metrics in a mixed-up world: the case for engagement rates as a core KPI and ignoring competitor audience sizes
How important is engagement rate in the context of ongoing campaign management? A common question that’s relevant to both the normal and current CV19 social world.…
158 LikesLeave a comment

Agencies launch COVID-19 screening to support sports and events
Working alongside AMCO, a company that specialises in artificial intelligence (AI) camera technology, a collective of agencies led by Alistair Gammell from Threepipe Reply is helping…
217 LikesLeave a comment

Ascension Healthcare PLC has turned to Threepipe’s Amazon specialist division, Emergent Retail, to support its Flexiseq range of products on Amazon UK
Flexiseq offers a clinically proven, drug free solution to the pain and stiffness of osteoarthritis. Every tube of Flexiseq is packed with nanoscopic droplets called Sequessome®…
161 LikesLeave a comment